Children’s arts are surely worth more

Just over 1% of public arts funding is directed towards work for which children are the main audience, reports Neil Rathmell

Against a background of growing concern about children’s wellbeing in the UK, negative perceptions of children and a feeling that childhood itself is undervalued, perhaps we should not be surprised that little more than 1% of public funding for the arts is directed towards work for which children are the main audience.

This is what Action for Children’s Arts found to be the case when we sent Freedom of Information requests to 20 of the UK’s major arts organisations, the four national Arts Councils and the British Film Institute. Their responses are included in a report, Putting Children First, to be discussed at a conference at the Unicorn Theatre, London, on the 19 June. 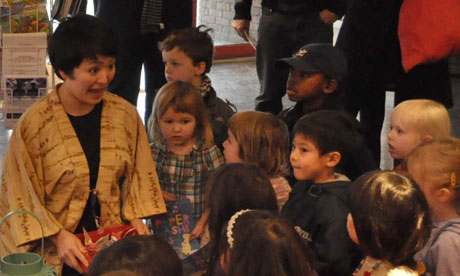 Children should be central to arts funding and programming, not sidelined. Photograph: The Albany

We asked the UK’s arts funding bodies what proportion of their grants helped to fund work aimed at children up to 12 years of age – none of them were able to give a precise answer. The BFI was unable to identify films made specifically for this age group, only those classified by the British Board of Film Censors as either U, PG or 12A.

Each of the national Arts Councils gave a high priority to ‘children and young people’ but none of them could say exactly how much their clients spent on work aimed at children.

We asked our sample of arts organisations how much of their budget went on productions, performances, exhibitions or broadcasts aimed wholly or mainly at children up to 12 years of age. It was a relatively small sample, covering all the major art forms, but the degree of consistency between the answers we were given suggests the results are likely to be representative.

The BBC spends 3% of its budget on programmes for children. That’s less than it spent three years ago. On average, the UK’s flagship arts organisations spend just over 2% of their total budget on the performance or exhibition of original work for children.

Since the publication of The Arts in Schools by the Gulbenkian Foundation in 1982, the arts world has generally perceived its relationship to children in the context of education.

Successive governments have funded programmes such as Creative Partnerships to promote links between the arts and education sectors. Government-commissioned reports – from All Our Futures in 1999 to this year’s Henley Review of cultural education – have argued for the central place of the arts in children’s learning.

Most arts organisations today have strong education departments running programmes of high quality. The irony is that, in most cases, they spend more on these programmes than they do on producing or presenting original work for children.

It’s still the case that most theatres do one family show a year – at Christmas – and that most cultural organisations plan their programmes primarily to meet the perceived needs and interests of an adult audience.

Children up to 12 years old make up around 15% of the population – the arts have a special place in their lives. Through reading, singing and dancing, watching plays and films, seeing their lives reflected in paintings and sculptures, children’s imaginations are stimulated and they learn to be creative.

The attitudes, values and skills that we learn in childhood stay with us for the rest of our lives. No one who works in the arts would disagree with that, so why do we spend so little on children’s arts?

The cynical answer would be that more for children would mean less for grown-ups. The realistic answer would be that the arts are no different from any other sector in a country that came bottom of the league in the 2007 UNICEF report on children’s wellbeing in 21 industrialised nations.

But a better answer would be to make a less rigid distinction between children and grown-ups when it comes to the arts. The best children’s books can be read and enjoyed by adults too, and the best children’s theatre is a treat for parents and teachers, who have the added enjoyment of seeing the children enjoy themselves. The best artists think like children.

With our report and our conference as a starting point, Action for Children’s Arts will be campaigning vigorously from now on for an overhaul of practice in the arts world. We want galleries to put on exhibitions that children will want their parents to see. We want the production of original work for children to be part of the remit of our flagship cultural organisations. We want the BBC to start commissioning home-grown programmes for children again.

What could the campaign be called? Down With Bumble? Have Some More? Action for Children’s Arts is hosting a conference on 19 June at the Unicorn Theatre in London to debate this issue and we would welcome your comments and ideas below.